I have faced exactly the same challenge during the Rock My Website competition last year when John, Martijn and myself were building an accessible web site in ASP.NET. I wanted to implement a solution which would automatically markup all known abbreviations in de content using some kind of dictionary. As we weren't using any Content Management System we would need to think of another way to maintain the abbreviations dictionary. Eventually we have dropped the idea then, but now we have SharePoint 2007.

Looking at standard SharePoint 2007 features I have almost immediately came up with a solution for this challenge.

First of all to Provide a user friendly way to maintain the abbreviations dictionary. Storing it in a central location will decrease the amount of work required to maintain the dictionary and keep the definitions consistent. Then markup all the abbreviations found in the content so that HTML will become <abbr title="HyperText Markup Language">HTML</abbr> instead. Last but not least: replace only the first occurrence of an abbreviation on the page as it will provide enough information for a visually impaired visitor.

I thought the best way for storing and maintaining the abbreviation dictionary would be a custom list consisting of two columns: Term and Definition. Let's call the list Abbreviations.

Then the replacement logic. As replacing the abbreviations could be done in numerous ways I though it would be the easiest to customize the FieldValue web control and extend it with the required properties. You can find more information on this approach in one of my previous posts.

I have decided to add two properties to our extended FieldValue control: boolean MarkupAbbreviations to be able to turn it on and off easily and AbbreviationsList to pass the URL of the list as a parameter instead of hard coding it.

As we have the abbreviations available in code we can proceed and do the replacing in the content.

We will do the replace in the Render method. First of all we will need the content of the chosen field. To do the replace we will use the regular expressions again. This time we will use the abbreviation in combination with a word boundary (\b): if looked for HTML for example we want to find occurrences of HTML but not XHTML. Word boundary will pick only the complete matches we want. The last thing we want to add is the 1 telling the regular expression engine to replace only the first occurrence. That's it. Let's see how it works: 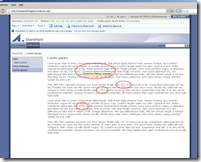 In the preview example I have used Mozilla Firefox as it underlines the abbreviations with a dotted line and shows tooltips with the definition on mouse hover. The solution works according to the requirements: we have an easily maintainable abbreviations dictionary and an automatic replace of the first occurrence of an abbreviation only. The downside is that the replace occurs within a field. Should you have multiple fields containing content with abbreviations on one page and you would still want to replace the first occurrence only you would have to think of a solution to store the already replaced abbreviations in a page wide available place.

Another extra feature might be extending the abbreviations dictionary with an extra column keeping the type of abbreviation so that they will be spoken out correctly when read using a screen reader. You would first define the CSS rules like for example:

and then markup the various kinds of abbreviations: