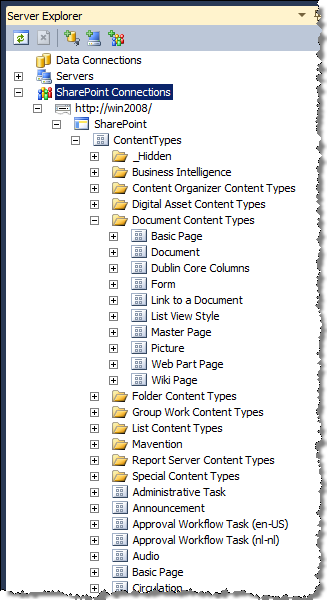 This view not only allows you to browse through the Content Types more easily and consistent with the SharePoint Web UI, but it also has one very important and useful feature.

With addition of the Content Types Groups in the next release of CKS:DEV you will be able to import all Content Types from the specific group into your SharePoint Project with a single mouse click! 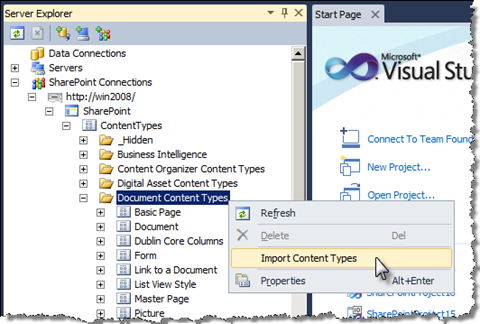 The only downside here is the limitation of the current extensibility API of the Visual Studio 2010 SharePoint Developer Tools. At this moment you cannot either hide or remove any of the existing nodes, so eventually you will end up with both full and grouped view of available Site Content Types.

Just recently we added to CKS:DEV support for importing Fields (Columns) into SharePoint Project. Similar to Content Types, importing Site Columns is a tedious process. The big difference is that when you might have just a few Content Types you will very likely end up with many more Site Columns, so doing all of it manually is just very time consuming.

In the next release of CKS:DEV we will be shipping a new node called Site Columns, which will provide a grouped view of available Site Columns.

Additionally it allows you to import a single Field but also a whole group into your project with a single mouse click!

Site Columns and Content Types are not the only area we’ve been improving for the next release. We’ve done some minor bug fixes and included some improvements suggested by the users of CKS:DEV. You can find more information about our work on the CKS:DEV Issue Tracker page. Also if you have any suggestions for future feature that’s the place to add it to.

Although the exact details about the next release are still to come, all I can say now is that it will be very soon and very exciting and if you are developer you should really stay in touch for the updates. Oh, and if you don’t want to wait on the official release, you can always grab the latest source and build your own version of CKS:DEV!