Using Delve is a great way of discovering new content. Even though it shows you content you might have not known about, everything you see, you can see because you are allowed to.

Staying in the know

Using Office Delve you can easily stay in the know and discover content relevant for you. By leveraging information recorded by the Office Graph, Delve shows you a rich overview of content that you might find interesting. Whether it’s content modified by you or your colleagues, a document that you have seen recently or a document that you haven’t event known about – Delve will show you the most relevant content for you to discover.

The great thing about Delve is that it shows content despite its location. As a result you no longer need to worry and keep track of all the different sites and places where the documents that you are working with are stored. Using Delve you can discover new content no matter where it’s stored.

One of the key elements of Delve is privacy. Content shown in Delve is retrieved from the search index which is security-trimmed so you can only see documents that you have permissions to see. On top of that, some signals recorded by the Office Graph, such as viewed a document, are private and therefore visible only to you, so no one else but you can see which documents you have viewed.

But it’s supposed to be private?

If you’re using Delve regularly, you might have experienced the following scenario: you viewed some other person’s page showing your private document to which you know that person has no access. Let’s take a look at the following screenshot: 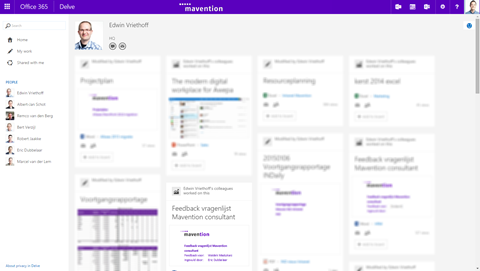 Knowing how Delve works it’s not that hard to tell why that private document is displayed in a place you would not expect it to be showed. The first hint is located in the tidbit (document card header): 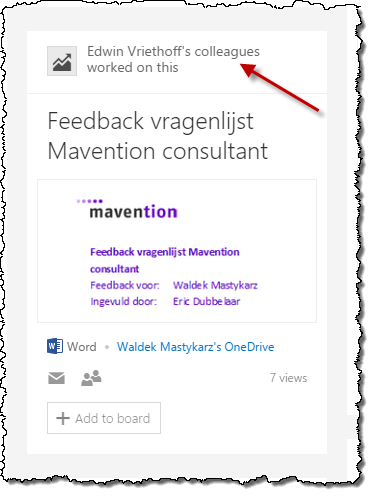 To verify, that only people who are allowed to view that document can see it in Delve, click the Who can see this? icon on the document card: 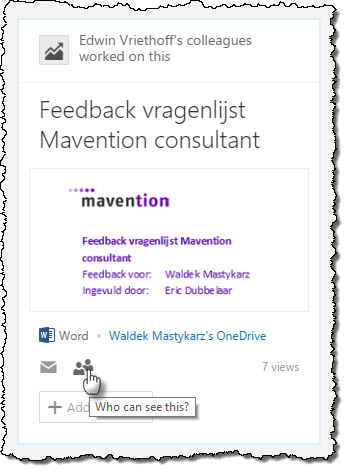 On the following page you will see the complete list of people who have access to that document. In my case I can verify that I am the owner of the document, Eric can modify it and only the two of us can access it (translated from Dutch):

Because those permissions are stored together with the document in the search index, I can be sure that only Eric and I can see this document in Delve.

Using the new Office Delve is a great way to stay in the know and discover new content relevant for you. Delve respects your privacy and even though it might be confusing at times why certain documents are displayed in certain places, you can be sure that you, as well as everyone else, can only see the documents that you are allowed to see.