Visual Studio 2012 SharePoint Developer Tools have been released recently and until the new version of CKS:DEV is released you can quickly deploy your SharePoint 2013 projects using Mavention Quick Deploy.

CKS:DEV has been a great productivity tool for SharePoint developers for the last few years. With all its different extensions it not only made it easier to build SharePoint 2010 Solutions but it also helped increasing efficiency by allowing you to quickly deploy changes to code and assets in your SharePoint projects.

Until the new version of CKS:DEV is released those of you who are already experimenting with SharePoint 2013 can use Mavention Quick Deploy: a custom extension for the Visual Studio 2012 RC SharePoint Developer Tools that I created that allows you to quickly deploy updated assemblies to the GAC. Mavention Quick Deploy isn’t in any way a replacement for CKS:DEV. Instead you should see it as a temporary tool to fill the gap and help you enjoy experimenting with the new capabilities of the SharePoint platform. 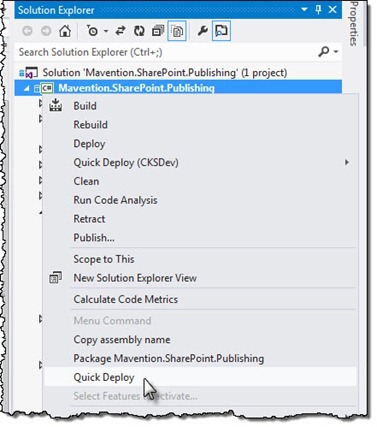 After you click the Quick Deploy menu item, the Mavention Quick Deploy extension will automatically build the SharePoint project for you, deploy the project assembly to the GAC and recycle the Application Pool hosting the Site Collection designated in the project properties.

Important: At this moment the Mavention Quick Deploy only copies the project assembly to the GAC. It doesn’t deploy any of the files to either the Web Application folder (inetpub) or the SharePoint Root (15 folder).