Recently I've built a custom connector for Microsoft Flow. Here are a few things I wish the documentation was clearer about.

Process automation for the masses

Microsoft Flow is one of the latest additions to the Office 365 suite. It allows users to build powerful automation scenarios for their work processes. Using Microsoft Flow, they can for example easily manage their e-mail attachments, get notifications when a certain event occurs or share information with their colleagues with a single press of a button. There are tens of connectors and hundreds of templates for users to choose from. And the best part of it all is, that using Microsoft Flow doesn't require programming skills, which makes it a very appealing tool for non-developer audiences. But there is more.

The real value of Microsoft Flow

When you start using Microsoft Flow, you can choose of tens of first and third party connectors and templates Microsoft made available for you to build your flows. Using what's available out of the box, you will be able to automate mundane tasks in your every day's work and spend your energy on what truly matters. But using the standard connectors will take you only that far. To truly benefit of the value that Microsoft Flow offers, you should consider building connectors for the applications your organization uses.

What you should know about building connectors for Microsoft Flow

Recently, I've built a Microsoft Flow connector that allows you to analyze the quality of your SharePoint applications. And while there is some documentation on how to build Flow connectors, it didn't quite answer all my questions.

When you start building a connector, you have three options. You can either import an existing Swagger definition of your API, import a Postman collection or start from scratch and define the actions and triggers manually. 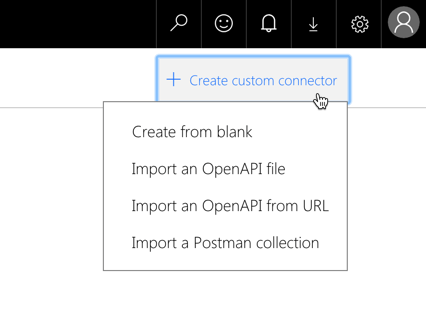 In fact, there are four options:

Building Swagger isn't always trivial. While there are some editors that give you feedback whenever something isn't correct, it's all based on the JSON schema of a Swagger file, which isn't always clear about what is wrong exactly. The good news is, that you can create the connector in Microsoft Flow, and once it's working, you can export it to a Swagger file with everything you configured. If you don't have Swagger definition for your API, you should definitely export your connector and store it somewhere safe in case something changes and you need to restore it to its previous state.

When creating a Microsoft Flow connector, one thing you should be certain of, is its name. Once you create a connector, you can't rename it. The only way to change its name, is to remove it and recreate it from scratch with the new name, breaking all existing flows in result. The good news is, that you can recreate the connector either using the existing Swagger definition or by exporting the connector to a Swagger file, but still you will need to reconfigure all flows using that connector.

When choosing a name for your connector, keep in mind, that at any time you can add new actions and triggers and the connector's name should be generic enough to accommodate them. Typically it will be the name of your application for which you're building the connector.

When I started building my connector, one thing that I totally missed, was the fact, that each of my request parameters was actually a button allowing me to edit its details. 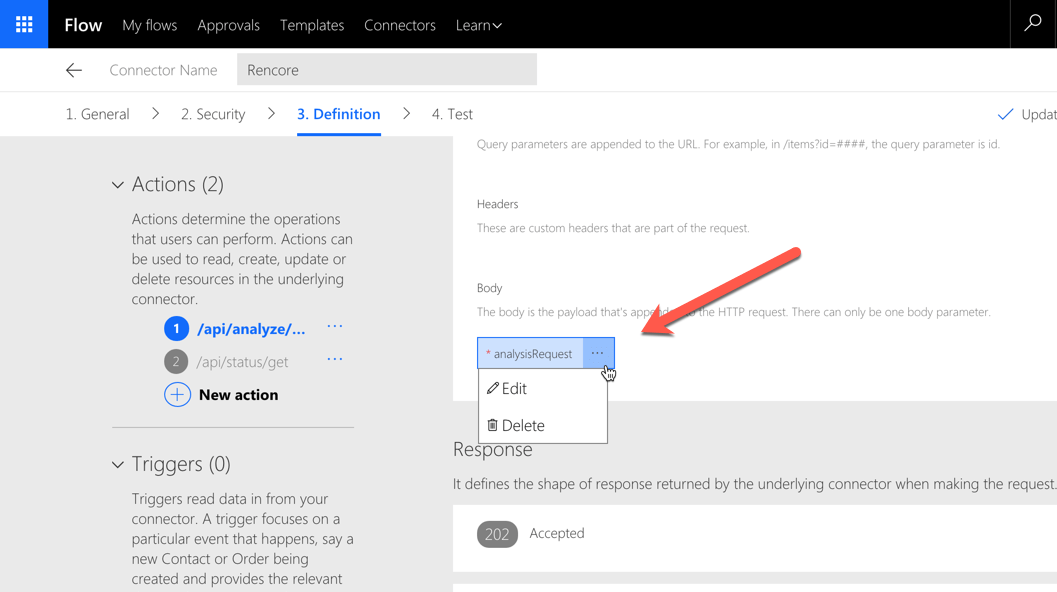 When you click the button, a context menu appears, allowing you to edit properties of the particular property, which is necessary in case you want to change its data type or visibility in the Flow editor.

One of the most cryptic things I've come across, was how to get the contents of a binary file correctly in my API. When you build a flow using for example Outlook and OneDrive and analyze its execution, you'll find the contents of the binary file passed between the actions as as a base64-encoded string. But when your API specifies one of its request parameters as a string, you will get the raw binary data instead, resulting in a broken payload.

It turns out, that in order to get the contents of a binary file encoded as a base64 string in your connector, the request parameter which will hold the data has to be marked as Type: string, Format: binary. 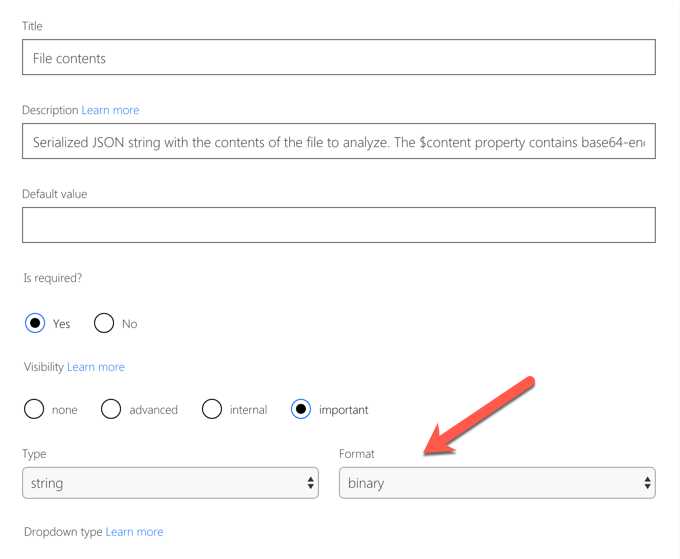 Your API will then receive a payload with a file property (following the example above, but you are free to choose any name for the property) which by itself will be a JSON object that looks as follows:

The $content-type property specifies the mime-type of the file. The $content property contains the base64-encoded contents of the binary file. This is how Microsoft Flow will deliver the contents of a binary file to your API. If your API expects anything else, you will need to adjust it to support a request in this format.

When your API gets called from Microsoft Flow, it should return a response instantaneously or at least as quickly as possible. But what if your application needs to perform a long-running operation?

Let's take a look at a sample sequence of requests to an API that performs a long-running operation. At first, you issue a POST request to trigger the operation:

The API accepts the request and starts the long-running operation in the background:

After waiting for 10 seconds, as specified in the retry-after response header, your API is called again to check if the job completed:

As the job is still in progress, the API once again responds with a 202 Accepted response:

After waiting for another 10 seconds, your API is called again.

This time, the job is completed, so the API returns a 200 OK response along with the job result.

What's impressive about this approach is, that it allows you to easily implement long-running operations in your API without troubling the user building a flow with your connector. As long as your API returns a 202 Accepted response, the flow will be stopped on your connector. As soon as your API returns a 200 OK response, the flow will proceed. And Microsoft Flow will handle all of that by itself, without the user having to do anything.

When async connectors work, they're nothing short of magic. But they can get pretty inconvenient when they don't. It's hard to debug them in case they don't work as expected. After your flow failed, only the first request and the last response are visible in the debug information. The calls in-between, responsible for checking if the long-running operation completed, are not visible in Microsoft Flow and can be traced only through your API's logs.

It's calling something, but not your API

When you're building a Microsoft Flow connector, at some point you will want to test it. When you do, you might notice, that Microsoft Flow isn't calling your API directly. Instead it calls a proxy, which then calls your API. In the network tools of your web browser you will find a URL similar to following:

The proxy is registered when you save the connector for the first time. Typically, things work as expected, and you don't need to worry about it. But sometimes, when you update the connector to reflect some changes in your API, it might take a moment for the changes to be propagated to the proxy. As a result, even though you have just updated the connector, for a while Microsoft Flow will keep using its previous version which will likely cause errors when calling the updated API. Unfortunately, there isn't much you can do about it, other than wait a few minutes.

Sharing the connector in your organization

If you're using Microsoft Flow on a free plan, each user can create only one custom connector. So if your organization needs multiple connectors, you either have to switch to a paid plan or distribute the custom connectors over multiple users.

Through custom connectors for Microsoft Flow you can empower your users to automate using applications in your organization. The process of building a connector isn't complex. Except for a few details, the Flow documentation is good enough to get you started, assuming you have a documentation of your application's API. With custom connectors you will be able to truly benefit of using Microsoft Flow in your organization.